“My life has been full of terrible misfortunes – most of which never happened.”   Michel De Montaigne

THE MOVIES THAT SHAPED MY TROUBLED MIND!

The Legend of Boggy Creek (1972) – NOTHING beats the original and, although I NEVER even saw the movie until I became an adult, this creepy movie poster showed up in the movie section of the local paper and gave me nightmares. I stared at that poster – in newspaper black and white – for a long time whenever I came across it. When I saw the movie trailer on television, I didn’t go outside at night for a week and we didn’t live anywhere NEAR a creek or a swamp.

The Fog (1980) – I was 13 years old, vacationing (painfully) with my parents at an aunt and uncle’s home in Amboy, New Jersey when my cousin and her boyfriend took my brother and I to see this John Carpenter ghost-revenge masterpiece. I remember sleeping on the couch in their living room and staying awake all fucking night – waiting for those four loud, solid knocks to let you know that Blake and his crew of dead pirates were at the door. 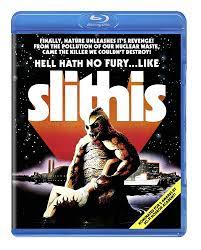 Slithis (1978) – If anyone saw this coming, I give you mad props! I saw this shockingly cheesy and relatively horrible movie at a drive-in theater with my parents on a Friday night – the night before the family went up north for the weekend. Once up north, my dad and I slept on a screened-in porch – a hundred yards or so from a lake – while the rest of the family was inside. I’m not sure I’ve ever been more terrified in my life. Another sleepless night.

The Texas Chainsaw Massacre (1974) – It was years later – like well into the 80’s – when I first saw this movie, but once again it was the preview that did it. My brother and I would stay up on Saturday night’s to watch the weekends ‘monster movie’ and inevitably the preview for this blood-fest would run. The video snips of the girl pushing the young man in the wheelchair while Leatherface chases them, the images of the screaming girl about to be hung on that hook – SEARED themselves into my kid-brain.

The Exorcist (1973) – Are you sensing a theme with these early 70’s classics? NOTHING scared me more than this movie and even now, at 54 years old, I still refuse to watch it – I can’t. Easily the scariest movie ever made!

Oh hell, I’ll throw one more on the fire… The Evil Dead (1980) – I saw this movie – or part of it – at the Jackson Drive-In the summer it came out. My buddies and I sat in lawn chairs in a spot next to my kick-ass Chevy Blazer with the removable top, up until the point where the demon-girl began guessing what playing cards were being held up. Of course my buddies and I were a little drunk at this point, but it scared us so bad we folded up the lawn chairs and left right then and there.